Wondering what the CH Foundation is up to now?

White Night of the Art Galleries

The White Night of the Art Galleries marks that time of year when people are encouraged to take a visual tour of the local cultural scene. Not to be neglected are people living in rural areas or those who feel the need to take a trip to the village to recharge their batteries.

So in October we set off for Cecălaca, a village near Ocna Mureș. We arrived near the building of the former cooperative where some villagers were busily husking corn. Three Shar Pei puppies greet me with love and playfulness. They push each other for a touch of attention. I try not to let the scenery steal me away for too long and I enter. That’s where the final preparations for the Cosmic Connections exhibits are taking place.

The exhibition marked the first collaboration between The Cosmic House Gallery and Studio Cultural Cecălaca. 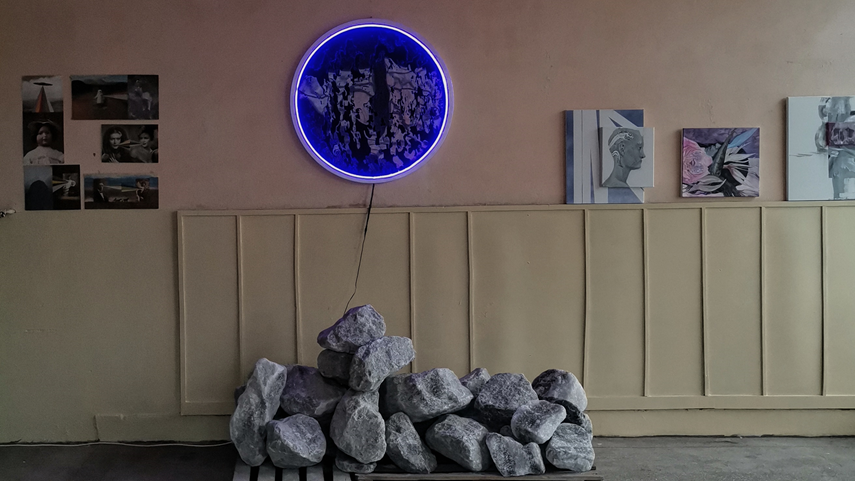 Cosmic Connections is not just about people and art, but also about our close connection to what our context offers us and how we make the most of it. Thus, in the first room, the display of works is interspersed with a pile of salt boulders specific to the area, kept in the exhibition space and illuminated by Alexandru Daniel Smuczer’s installation ‘Anamorf’. At the window on the opposite wall, at the boundary between inside and outside, you can see the birds in Călin Dumitrașcu’s wax paintings. In the next room, on the shelves that once kept the cooperative’s goods, now hang works by artists Laurențiu Zbîrcea and Vlăduț Gicoveanu.

Art in the countryside

Art in the bus station – Ațintiș

Coordinated by the Association of the Painting Department of UAD Cluj in partnership with Studio Cultural Cecălaca. Art in the bus station completes the circuit between the cooperative and the Cultural Center.

I look at the works then turn around. I see a cobbled alleyway leading up to the huge stairs of an obsolete temple. A relic of the communist period when the Cultural Center was a space dedicated to cultural propaganda in the village. Now, the Cultural Centre hosted the Show Off 4 exhibition organized by MATCA Artspace.

I walk out of the dorm and notice that even the village panorama is moulded to the Show-Off 4 theme, the temporary un/common place. The quiet houses, the bar, the cooperative that came to life for a limited time, the school whose façade was painted by the artist Oana Fărcaș, and immediately next to it – the sculptural park inaugurated thank’s the project Cultural Home – Construction Site.

The engineer and ethnologist Gheorghe Ungurean made a wooden portal carved with ethnic symbols representing the three ethnic groups of the commune: Romanian, Hungarian and Roma. The portal is located in the same location as the sculptural installations by artist Radu Cioca and his architect wife Teodora Cioca. The artists received support from the community in the creation of the installations.

The White Night of the Art Galleries

The White Night of the Art Galleries opened an atypical portal for villagers and visitors. A diversion from mundane activities and a breath of culture. A visual marathon in which we had the opportunity to watch the work of over 50 contemporary artists in a very unfamiliar context.

The collaboration marked the end of an extensive project – Cultural Home – Construction Site. The Project aimed to draw attention to the need for culture in the countryside and to the “Cultural Home” as an institution dedicated to the promotion of culture.